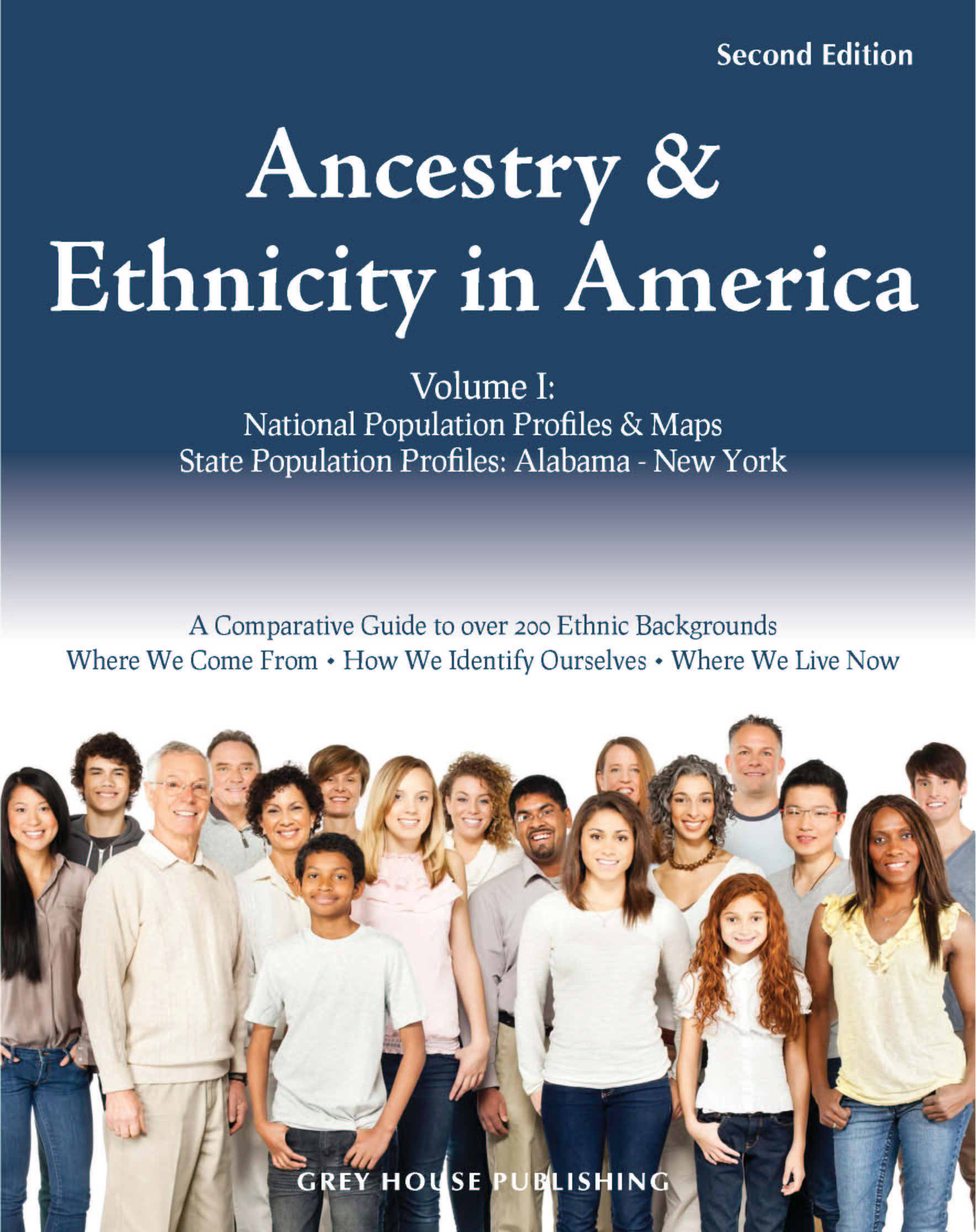 Includes Two Years of FREE ONLINE ACCESS to sortable ranking tables on the Grey House Online platform, plus a link to this content can be added to your Salem Press landing page.

Over 200 ethnic groups are profiled including 106 Ancestry groups, 25 groups by Hispanic Origin and 5 major Race groups further divided by 82 subgroups by country, tribe or Hispanic identification. Ancestry & Ethnicity in America pulls together a vast amount of information into one easy-to-use source.

Each of the specific ranking sections - Ancestry, Hispanic Origin, Race - begins with an Introduction and Cross Reference Guide specific to those ethnic groups.

Section Two: State Population Profiles offers an overview of each state, with population numbers and percentages for each Ancestry, Hispanic or Race group.  Next, individual place profiles break out the population number and percent for each group in that place.  Over 6,000 places with populations over 7,500 are profiled!  This informative city-by-city section allows the user to quickly and easily explore the ethnic makeup of all major population bases in the United States.

A Master Place Index shows the place name, type, county, state and the page on which their profile appears.

This information-packed resource will serve a wide range of research requests for demographics, population characteristics, relocation information and much more.

Free Online Access
Includes Two Years of FREE ONLINE ACCESS to sortable ranking tables on the Grey House Online Platform, plus a link to this content can be added to your Salem Press landing page.

View a Full List of Statistics and Demographic Titles


Request a Preview Copy for your library
REVIEWS
“ “Overall, this is a fascinating and interesting look at who we are as a country…”
~ Ancestry & Ethnicity in America ~ 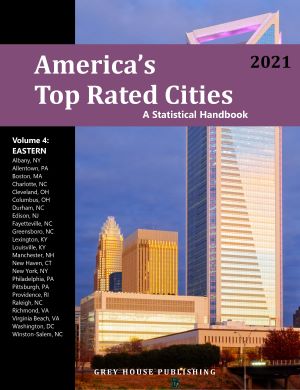 America’s Top-Rated Cities provides current, comprehensive statistical information and other essential data on the top 100 cities voted best for business and living in the United States. This 2021 edition features hundreds of new rankings and has been extensively updated to make sure hundreds of charts, tables, and data sets contain the most current information available. 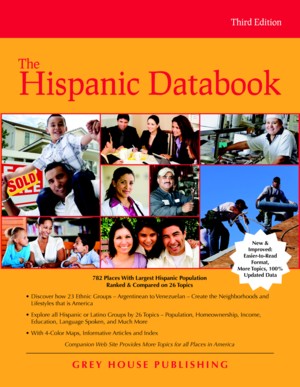 This information-packed volume provides a detailed analysis of the growing Hispanic population in the United States. Researchers will find Statistical Tables for over 6,000 places: 50 states, 600 countries, 5,700 Cities, for all 23 Hispanic groups, plus National State Comparative Rankings. This kind of comparative data can not be found elsewhere, in print or on the web, in a format that's as easy-to-use or more concise. 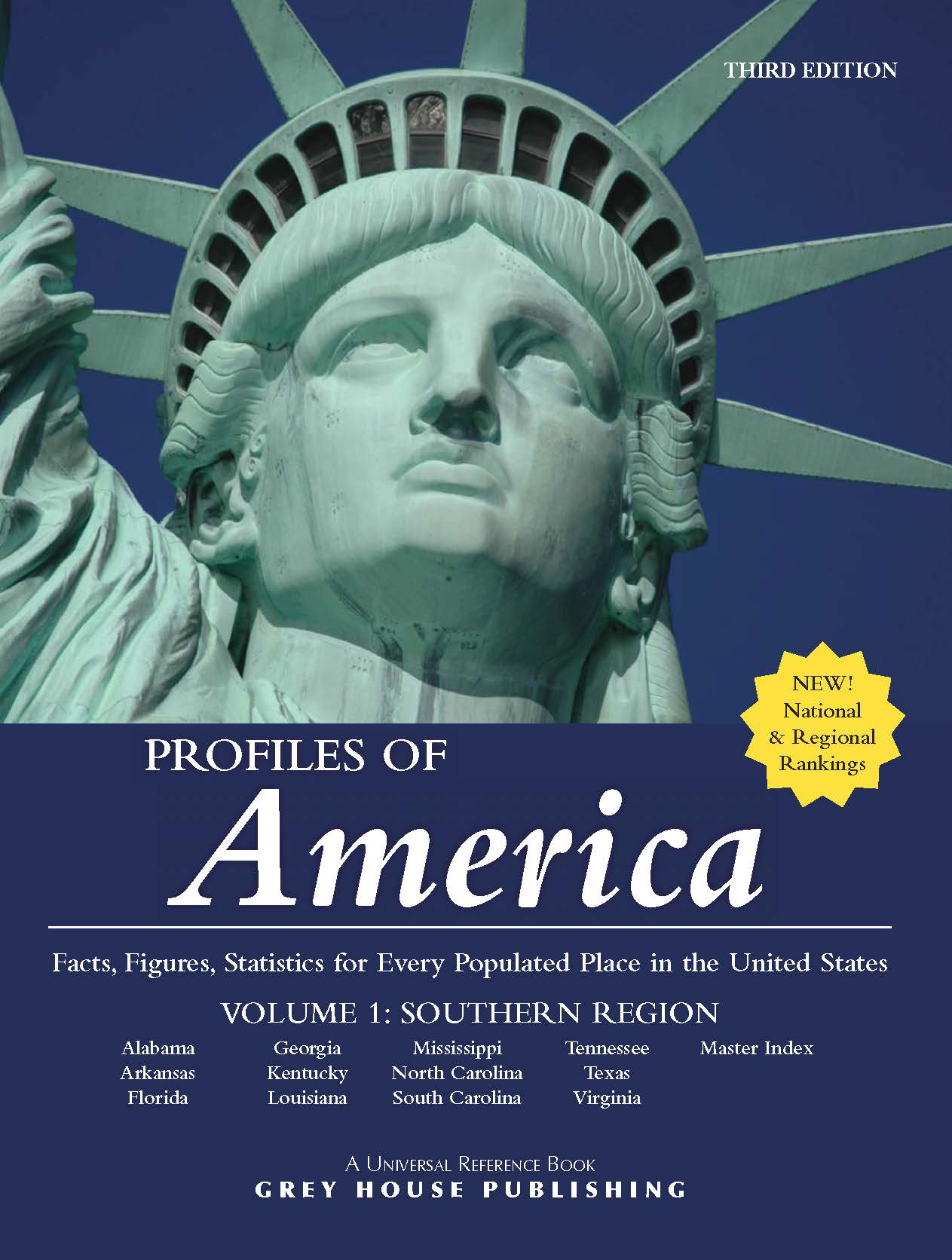 Profiles of America provides the most comprehensive portrait ever published of all populated places in the United States. These four volumes go beyond Census statistics, beyond metro area coverage, and beyond the 100 Best Places to Live. Drawn from official Census information, other government statistics, and original research, this reference source pulls together statistical and descriptive information from locations across the country.